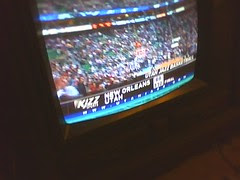 9 Straight!
Originally uploaded by Theorris
Three point fest tonight. Rock on. A comment was made that "we won't see that happening again for a long time from a Jerry Sloan team" by, I think, Jeff Hornacek. Despite his experience with Sloan, I certainly hope that is not the case. It has been nice watching the Jazz develop the long bomb game, along with a strong inside presence over the last 2 years. Sloan has been unfairly categorized as a inside game guy. Perhaps he's changing in his old age. Perhaps he can develop a full-court sense. Perhaps he skillfully works with the players he has on hand. I think that is the case. With Okur, Korver, Kirilenko, Miles, and Williams as potential long ballers, I think he is set. Given that Okur has suddenly ramped up his inside game, I think we're golden.

Round 3* in the finals, here WE (as in the Jazz) come! Now if the Jazz pull of a Conference win, oh my.

*Parker's out. Marbury won't get in the groove for the playoffs. The Jazz will be lucky if the first round in the playoffs is either New Orleans or San Antonio. They will be cruisin' to the third round if that's the case.
Posted by Clint Gardner at 9:29 PM