(Polyester fabric is concocted
From the tears of dinosaurs, oil rich
And strong with fibrous fear learned hard in the
swamps)

"These pants would survive a nuclear war,"
She declared as she pulled them fast and
Taught over her hips, pulling the elastic wide
And letting go of the band with a pleasing
Snap

And nuclear war was a possible thing back then,
You see.  While we may not have dived under
Desks at the first sound of a siren, we all knew
That the possibility was there that we could wake
Up dead, or worse, and that there would be no more
Saturdays

We watched it on the jittery rolling lines of TV
Saw the flash saw the bones saw the flesh melt
Away because of a disagreement about how the
Economy was supposed to run and how poor people
Were supposed to be poor in each, which rules
They were to obey and which leaders they should
Adhere

(Karl Marx, by the way, dreamed of living in a
Hut, where, when approached, he would dole
Out life advice to the poor sots who were just
Looking for directions to the nearest Chevron
But he'd go on, and on, and the visitors kept
Inching further back from his threshold in
Silence

Only to run--finally escape and end up at Charles
Darwin's hut, replete with desiccated samples of
This and that bug, and this and that plant and this
And that life. Darwin had nothing to say, other
Than "Live with it." And inching back inching
Away, Darwin takes and interest and thrust a bug
In her face

"That's it!" the visitor declares, shoving her hands
Deep into non-existent polyester pockets to find
Nothing but fibrous rage. Turning sharp, she next
Finds the hut of Adam Smith, who is too busy counting
Gold to even answer the rasping knock of flesh on
Palm fronds

"Get to work," is the only thing he says)

Posted by Clint Gardner at 5:37 PM No comments:

When my grandfather visited
(a rare occasion since he lived
so far away across mountains
of crumbling red sandstone and
vast valleys of sea green sage)
He would be up at dawn
Every morning to rake the yard
Of sticks and leaves and paper
Blown in by the wind
He grasped the rake firmly with
His one good hand, using his
Frozen arm to counterbalance

Later, not long after he passed
While looking at books on
Japanese dry gardens,  I made
The connection.  Who am I to
Know whether or not he had
Made it too while the rake
Scratched pattern and form,
Order and purpose on the clay
Back and forth. Back and forth
Taking away that which doesn't
Belong 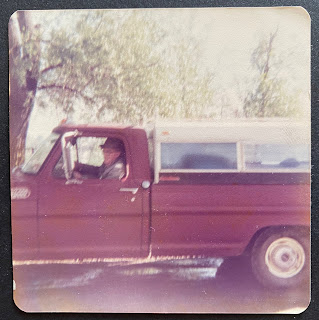 Posted by Clint Gardner at 7:12 AM No comments:

Listening to all your iTunes Library Reverse Alphabetical Order

But in reverse
Alpha
beti
cal

They start with numbers

Your are soon rolling through the decades

And suddenly you are walking 2000 miles,

Remembering the snow falling down

But not missing and no children

Though when you first hear that song

It was long before anything burst

Any hint of that loss

(of all all time)

Posted by Clint Gardner at 5:27 PM No comments: