I was thinking, just now as I was noticing that all the snow has disappeared from the yard, why twitter has become so appealing not just to me, but to the masses. I believe with twitter there is a strong correlation to the solitary spoken utterance. Tweeting is much like making any statement in normal conversation. You say something, usually less than the 140 character limit of twitter, but sometimes up to the limit, but rarely over it and then you may or may not wait for a suitable response from your interlocutor. The difference, of course, is that it is not a normal conversation. There is no interlocutor built in. You are making proclamations in twitter--choosing willy nilly who you want to respond to or not. Ultimately you are saying "I am here. This is what I say. Screw you."
Now with twitter, of course, as with normal conversations, sometimes your statements go unnoticed, so you either repeat them or move on with the flow. Sometimes you completely ignore any attempt at conversation and just make your statements as if you are some sort of radio commentator not expecting interaction. The key is that you are a radio host--you are the writer--you are the solo speaker who gets to say what's on your mind.
In some ways that "I can say this and you better lump it" works well for twitter. It is the ultimate in individualistic display. "I'm here and listen to me tweet" it says. Listen is the important part: it isn't about reading, it is about hearing the utterance.
Ah the utterance: the spoken moment.
Twitter allows us all just to say the one thing, much like writing lets us ignore the reader and just put it out there. Yes, yes, I know writing is all about the reader, but it is a very self-centered activity, isn't it? It is all about hearing ourselves talk (and liking it) rather than engaging in a conversation.
I am here! Hear me tweet!
I am here! Read my blog!
I am here! Read my novel!
I am here! Read my poems!
I am here! Read my tweets.
How embarrassing.
Now, of course, we have to decide if writing of any sort is anything more than a self-centered, self-deceptive act. Plato thought it was self-deceptive, now didn't he. He thought it was a lie. A fantasy, if you will. The shadows on the wall loom large with "writing." It is the playground where we can put letters together to mean what we want and give it out to the world to let them do what they want with it.
If you are waiting for some joke, I'm not going to make it. The very purpose of Signifying nothing is to explore these complexities, after all. How are we represented in text and how does that reality make us and shape us and force us to be human beings.
Posted by Clint Gardner at 8:27 PM 4 comments: 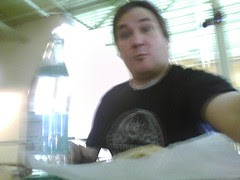 The best part about going for lunch at Whole Foods yesterday was that I ran into Megastore! I recommended she buy a fancy cake for her Oscar party tonight. She demurred.

Why can't I run into my cool friends all the time? Instead I usually run into ex-girlfriends or people who annoy me.

Something tells me I should stop this post before I insult someone. For once I am taking my own council.

Brandon Loomis is a rank amateur when it comes to living without a car: Seven Days Without: No car? No sweat? No way - Salt Lake Tribune. It does take time to get used to doing with out and to realize that you are going to have to take more time in order to get to where you want to go. I will say, however, that the premise that Loomis is working under is not mine: I'm not car-less because of economic reasons. I am car-less because of stubbornness and environmental reasons. I am stubborn because I can't see the use in having a car only as a luxury (and not as my main means of transportation) and my environmental reasons are pretty obvious.

While Loomis may be saving money trundling about town in his own car because everything is so close, he is not helping the environment by re-joining the legion of single-drivers. He, in fact, is compounding it.
Posted by Clint Gardner at 10:02 AM No comments: 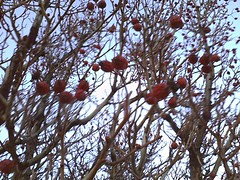 The snow fell gently yesterday. It had none of the bluster of a January storm. Even those who hate winter could surely have liked that kind of winter day.

It was years ago, has it been years ago now?

The lie that makes you want to rip the world
Apart

She thought she knew me, and she did, in so many
Ways.

She caught me in that framed bit of truth

And I was angry when I read the poem
That at the time I embraced, as I embraced
Her

I was angry reading it. I was me. I was not
That

But she was right

Even God put on the spot

I recall reading some time ago that human behavior is motivated more by perceptions of what other human beings are doing rather than on any particular reality that one is facing. We humans are very intuitive creatures, who interpret situations not just intellectually, but also by environmental and social influences. For example, in a psychology experiment designed to determine how unconscious factors influence people, experimenters had test subjects handed either a warm cup of coffee or a cold cup of coffeed to a test subject before they went into an interview. On the whole the people who held the hot cup of coffee perceived the experience of the interview more positively and also performed better.

What I am getting at is that if something so simple as warmth can have an impact on us, imagine the impact of our fellow human being's behavior--subtle or not. The economic down turn has really only started hitting the middle class right now, what with the massive layoffs in January (the greatest since 1974). That didn't stop people from participating in the meme of economic collapse, however. People stopped spending the moment all the bad news started rolling in. (Most of the big losses were initially only seen by people wealthy enough to invest plummeting stock market.)

People, of course, are scared. Hell I'm even scared and I, quite honestly, don't have that much to worry about or, in fact, to lose. Sure it would suck being out of work (and the imags of bread lines do flash into my mind occasionally) but I am fairly mobile in my lifestyle and could hit the road if worse came to worst. While I think my job is fairly secure, recent events have made me and many other antsy. Thus we have the downward spiral of the meme of the bad economy.

All I know is I just need someone to hand me a warm cup of coffee before I hit the cold world tomorrow. Maybe that will make things look better.
Posted by Clint Gardner at 11:55 AM 2 comments:

My obsession with twitter and crap at work have made me a bad blogger, I fear. If it can't be said in 140 characters is it worth saying? Well, yeah, but as I treated twitter so badly for a year and a half or so, I figure I might as well be nice to it and post around 800 tweets in the last couple of weeks.

I suppose i have something more discursive to write at some point, but it sure as hell ain't now.

Lord Jeebus get me through the winter.

Shit just in writing this I thought of three really good tweets.
Posted by Clint Gardner at 8:19 PM 7 comments: