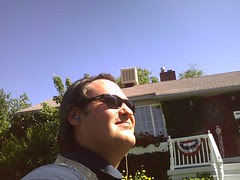 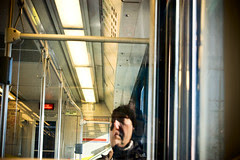 I've already achieved 60 car-free trips. How about you?

Posted by Clint Gardner at 8:53 PM No comments: 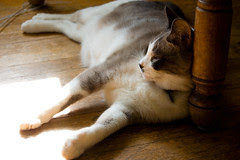 It's Summertime
Originally uploaded by Theorris

Posted by Clint Gardner at 6:27 PM No comments:

I regreted this moment 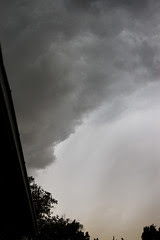 I regreted this moment
Originally uploaded by Theorris
Posted by Clint Gardner at 10:20 PM 1 comment:

When I heard the learned astronomer

A poem by Walt Whitman criticizing science, of all things. Imagine that, poetry not getting along with science:
Posted by Clint Gardner at 11:08 AM 1 comment:

Here is a poem of moral turpitude by 19th century American poet Julia Ward Howe read, dramatically I might add, by yours truly:
Posted by Clint Gardner at 12:02 PM 1 comment:

Hard Times in the Heartland

Work took me to the midwest this weekend. I was in the middle of Illinois. The corn in Illinois was barely an inch out of the ground. When I commented how strange that seemed, the driver taking me from the airport to the hotel scoffed. "It has been so wet and cold here I'm surprised it is up at all." The farmers, it would seem, are worried. They are uncertain that they will get much of a crop this year. Compound this with the economic decline, and you can imagine that people's spirits are as low as their corn seedlings.
It was overcast and while not exactly cold, it wasn't exactly warm my entire time in Illinois. Like much of the country, there is a great deal of concern about where the country is going economically. The housing market is in the tank, and even farms are being effected badly. If you don't know, many farmers run their businesses off big seed loans (literally) from banks. The bank loans the farmer enough money to plant a crop, and the farmer harvests the crop and pays the bank back with interest. Since the banking crisis, the money is in short supply, and banks are worried that the Federal Government (which has been in the business of subsidizing crop insurance to farmers since the Great Depression) will not be in that business much longer.
The people I spoke to in various places, however, seemed to be optomistic. "We've been through this before and survived. We'll do it again," was the response from the old woman at the airport curb when I asked her how things were in Illinois. She took a long drag on her cigarette and added with a phlegmy laugh: "they've been telling me that cigarettes were going to kill me for a long time now, and that hasn't happened yet either."
Posted by Clint Gardner at 10:36 AM 7 comments:

A couple of very quiet attempts

Editor's note:  this post was originally uploaded by Snyder to a now defunct "Silence Project."  I keep it here for archive purposes.

Here is one from a few days ago recorded late at night. Nice little bit of wind, then a car ruined it. So it goes.

Here is another from tonight's rain and thunder. I do have to say, Theorris' thunder/rain contribution from earlier tonight is far more epic. Still, here you go.

Posted by Clint Gardner at 7:28 PM No comments:

Silence of the Rain

Well there is no silence: several cars swooshed by. The thunder is still good, however:

The Silence of the Walk or Clear the Air

I commute via mass transit and walk daily to the bus stop. The following recording is just 30 seconds of a 5 minute walk:

Posted by Clint Gardner at 1:40 PM No comments: 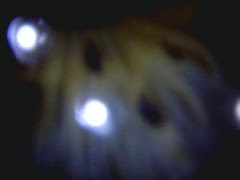 I just got a Carson zPix 200. While I'm sure it is not the greatest microscope by any means, it is still interesting to mess around with.

This is my eye close up. Do not try this at home.

The following link is not a recording, but I suppose this blog's mission could be expanded to discuss all aspects of sound pollution and natural soundscapes: Western Soundscapes Archive.
Posted by Clint Gardner at 6:52 AM No comments:

Editor's note:  this entry was originally published by Snyder on a now defunct "Silence Project" blog.  I post it here for archival purposes.

It is hard to escape noise.

So I gave up for today, I'll try again later.

As long as I've given up for the day, here is some of tonight's rain.

Diptych of Spring: One Can Only Hope 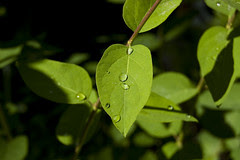 Diptych of Spring: One Can Only Hope
Originally uploaded by Theorris
Posted by Clint Gardner at 9:41 PM 1 comment:

Diptych of Spring: It is easy to forget 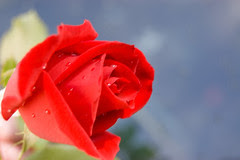 Diptych of Spring: It is easy to forget
Originally uploaded by Theorris
Posted by Clint Gardner at 9:41 PM No comments: