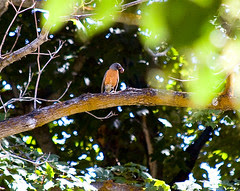 There is a robin nest in the tree in front of my house. I first spotted it two weeks ago when there was a hatched egg on the sidewalk. Since then, the parent robins have been making many feeding trips to the nest. What a busy life they lead. This is the father robin (noted by his flashy red breast less prominent in the mother robin). He is quite leery of me sitting under the tree. 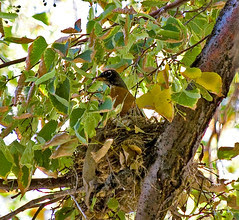 The father robin overcame his suspicion of me and flew to the nest. As far as I can tell there are at least 2 chicks. There may be 3. You can see the head of one in the typical feeding posture obscured by the leaf right in front of the adult.

Posted by Clint Gardner at 12:42 PM No comments: 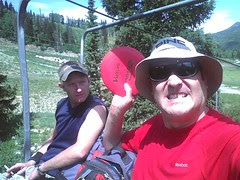 Catinlap and I were sadly the only entrants in the D47GC, but it was a good day anyway. Cat won by 5 strokes, but I put in a very good showing for my first opportunity of the season with an 81. Don't ask what par is. I'll smack you.

This is also the only 365 day self-portrait I have that contains another person.

Posted by Clint Gardner at 4:51 PM No comments:

Running though the sprinklers 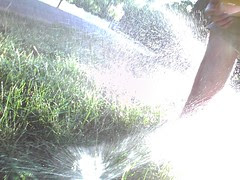 273/365: Running though the sprinklers
Originally uploaded by Theorris

It is probably just a Western US thing, but it is every child's god given right to run through the sprinklers when it is this freaking hot. Especially on Pieneer Day Eve!

And what do you know? Another Pioneer Day is upon us!

This sculpture is extraordinarily popular. 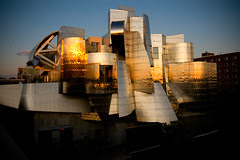 I was in Minneapolis for a conference. Other than my first night and last day it was overcast and cold. Here we have the Weisman Art Museum, a Frank Gehry building. It was not far from the hotel. 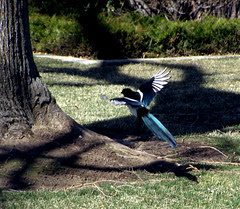 Magpies are one of my favorite birds. Sure I like eagles and robins and pine finches and whatnot, but the western magpie is an awesomely cool native bird*. Unlike others, I like their interesting sounds and their propensity to dive-bomb any threat to their nest--cat--dog--human--volkswagen.

I once had a colleague decry the horrible nature of magpies (not you Counterintuitive). I had to restrain myself from laying into her and her rather parochial views of nature.

Apparently you can train magpies to talk, if you are heartless enough to remove them from the wild (which is our suburban/urban/rural environment.)

*The western magpie differs from the eastern magpie (or European magpie, I think.) I am not completely sure that they are native to the western North American continent, but I think they are.

Update: The American Magpie (Pica hudsonia) is indeed an American native. It has been in the West of the United States for around 18,000 years. Somehow two-bits a head seems an awfully weak price for such an ancient and stately bird.

Twenty-nine years ago this morning at 6 am I was awakened by my mother telling my brother that my father was dead.

"Larry, your dad's dead." Her tone was plaintive and quiet. I don't know how long she had been at my father's bedside before she decided to tell her children. I do know why she called out to my brother, however. In the fog of finding her husband had finally succumbed to the cancer that had been slowly consuming him until he was literally nothing but skin and bones, she called out to my brother because she had always identified the same qualities of patience, fearlessness, and strength in my brother that my father had.

My brother was 5 years old than me and aside from working a full-time job, also ran the farm now, since my father had been far too ill. I'd just finished my freshman year in high school and was spending my summer vacation at my typewriter writing about people who lost things at a terrible price and avoiding my father.

I lay in bed that morning trapped under the covers by fear while my brother went to my parents bedroom to do whatever it was that he could do. I was afraid of the dead man in the room next door, as I'd been afraid of the dying man for the last 9 months. Since school had let out a month before, I'd been trapped in my room at my typewriter by fear of his dying. All I wanted was for the pain of watching someone waste away in agony to go away.

It took me a good hour to unstick myself from my bed. My parent's bedroom was quiet when I peeked in through the doorway. My father was lying in bed his arm cradled over the top of his head in his usual manner, and in the manner that I and my brother share when we sleep. I could only look at him for a moment, as my eyes caught his cold, dark, unblinking eyes. All I wanted to do was run.

And I did run: out of the house, across the farmyard, out behind the haystack. I sat there, hunched against sweet-smelling bales and cried. Even then I knew I was crying more for myself than I was for his pain and suffering. I was feeling adrift--but a relieved adrift. My father's illness that had been slung around my family like sacks of wheat, had suddenly fallen way. All his pain and watching him suffer was gone. Now there was nothing left but the unmoving shell of the man. Now there was nothing left but my pain and suffering and guilt.

I climbed the haystack to watch the undertaker come and haul my father's body away. I started to realize then, but wouldn't really learn until years later that taking the body away would not remove the guilt and emptiness. No coffin would seal that up for eternity. No amount of earth would keep it quiet beneath the ground.

I awoke this morning at 6:00 am, as usual, still a bit tired from the long holiday weekend, and caught myself wondering, yet again, what my life would have been like if he'd never had gotten sick. Some losses do come at a terrible price, I fear.

In honor of the wet summer SLC is having, I give you this tribute:


The sound of the storm is supposed to overwhelm the music. It is meant to be that way. Did I ever tell you I nearly majored in music and am a big fan of musique concrete? I didn't? Interesting.
Posted by Clint Gardner at 1:34 PM 1 comment: