Growing sideburns for lisa b 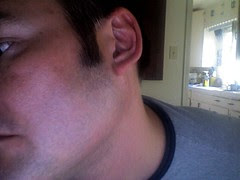 Growing sideburns for lisa b
Originally uploaded by Theorris

I took this shot 2 years ago and it is suddenly getting a substantial number of hits on flickr. Why? Are sideburns in vogue (possibly) or is it my kitchen that everyone is interested in? Or is someone out there searching for everything related to Lisa B.

Why the hell was I growing sideburns for you Lisa? Do you remember because I sure as hell don't.

Aside from 6 letters in the same order, Ireland and Iceland also share something else in common: mitochondrial DNA (mDNA). mDNA is the kind of DNA you get from your mother. It, in fact, is handed down daughter to daughter, generation after generation. What is interesting about Iceland is that even though it is assuredly Scandinavian, a good share of its mDNA is closely related to women who lived in Ireland thousands of years ago.

How is this possible? you ask. Space aliens? While space aliens would be a very satisfying answer, scholars speculate that the real answer is much more earthy: rape and pillage. You see for centuries Vikings terrorized the British isles, storming in and stealing goods and women. When settling Iceland randy and wifeless Norwegians took a nip into Ireland and stole some them some wives. Ipso facto. 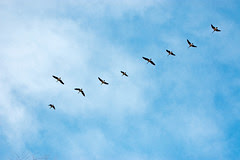 Over there
Originally uploaded by Theorris

Woo hoo! My photo was featured today on NewWest.Net.

There were many birds in Fort Colliins, Colorado, while I was visiting. 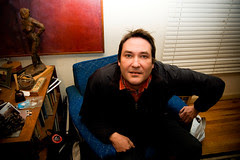 You can check Signifying nothing to determine how many times I've gone bowling on my birthday. I'll be sure to tweet the events.

On the eve of my birth, I feel angry.
Listen to the words. Listen to the slap
Of angry metal against supple flesh.
Can you ever forgive yourself?

But you pretend and you pray.

Prayer's got the answer, does'nt it? 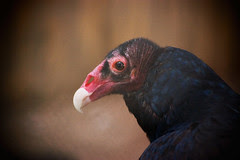 Jesus Loves You
Originally uploaded by Theorris
Posted by Clint Gardner at 12:08 AM 7 comments:

Given that my begrudging acceptance of twitter has developed into a full-blown micro-blogging love affair, it makes sense that while I was doing the dishes this morning, my mind turned to creative twitter projects I could engage in.

The first is one that I will probably start sometime within the week: "Twitter Haiku Challenge." Basically everything that one tweets must be 17 syllables and contain some natural imagery. Twitter really can't do line breaks very well, so it won't have to look like a haiku.

The next project is one, that I find, someone else has already done. Thank god for that, since I doubt that I would have the wherewithal to take on the twitter-guise of Henry David Thoreau and tweet Walden at you. I am still amused, however, at the thought of this tweet:

"The mass of men lead lives of quiet desperation. LOL"

It looks like twitter Henry David doesn't quite have my sense of humor. Not a LOL or ROTFLMAO in sight.
Posted by Clint Gardner at 10:10 AM 5 comments:

I'm your only friend

I'm your only friend
Originally uploaded by Theorris
Posted by Clint Gardner at 11:13 PM No comments:

From the Typewriter to the Bookstore: A Publishing Story

Best lines (not-exact):
"Authors take between 10 to 30 years to produce a text."
"The author will submit the text to an agent. The agent will staple it and submit it to the editor."
"Editors traditionally select character names."
"All communication between editor and author is conducted on twitter." 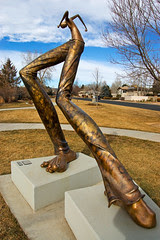 While visiting friends in Colorado, I had the opportunity to go to the Benson Sculpture Garden in Loveland. It is certainly and excellent place and something that SLC would be wont to emulate. While the sculpture was a mixed bag, none of it was exceedingly bad nor amateurish. The garden certainly could appeal to a variety of tastes.

Imagine if SLC actually cared for its parks? Imagine a sculpture garden by Lindsay Gardens where the "Salt Lake Garden Club" started a park nearly a 100 years ago and it went to pot because no one cared enough to preserve it. Imagine.

I was a bad photographer and did not note the names of the sculptures I was imaging. This sculpture, however, is by far the coolest and most evocative sculpture in the Garden.

The motion of it is stunning. I fear I do it little justice.

More than a month ago I submitted a DNA sample to the National Geographic Genographic project. Basically it traces your deep ancestry. While I'm fairly confident in my paternal heritage being Northern European and specifically Scottish/British (and perhaps, due to my specific clan, Viking in origin), I received the following message when I logged in to my Genographic page:

Your sample has completed the DNA analysis phase of testing. However, during quality control your initial results failed to clearly indicate your haplogroup. We must perform additional testing to accurately determine your deep ancestral lineage. This is not uncommon, but will delay the posting of your results by two to three weeks.

We appreciate your patience. Please also note that this delay is a sign of the Project's success in increasing the diversity of samples in our database.

If we find that there is a problem at any point during the processing of your sample, you will receive an updated message when you log in to check your status."

The implication here seems to be that my particular genetic sample may be new to their database. How exciting! Perhaps my ancestry is not as clear-cut as I assumed. Or, more likely, I messed up the sample some how. It could perhaps also indicate that my genetic relatives are too tight-fisted to plunk down the money to get a genetic heritage test.
Posted by Clint Gardner at 7:31 PM 4 comments:

Open speculation is welcome, but I'm on vacation, suckers! This is one for my mother, Camilla Taylor, Cordelia, Hopabout, and lis (the only truly crafty people I know): Brother Introduces Quattro™ 6000D.

My only question is, does it blog?
Posted by Clint Gardner at 6:12 PM 2 comments:

There are 3 categories to my awards this year: Fine, Great, and Best. Why? I couldn't be assed to think of anything else.

And the winners are

All award recipients will receive one free dagger hallucination and a bar of soap.
Posted by Clint Gardner at 2:38 PM 2 comments:

I received this in the morning mail:

Today is a particularly sad day for all of us at JPG and 8020 Media.

We've spent the last few months trying to make the business behind JPG sustain itself, and we've reached the end of the line. We all deeply believe in everything JPG represents, but we just weren't able to raise the money needed to keep JPG alive in these extraordinary economic times. We sought out buyers, spoke with numerous potential investors, and pitched several last-ditch creative efforts, all without success. As a result, jpgmag.com will shut down on Monday, January 5, 2009.

The one thing we've been the most proud of: your amazing talent. We feel honored and humbled to have been able to share jpgmag.com with such a dynamic, warm, and wonderful community of nearly 200,000 photographers. The photography on the website and in the magazine was adored by many, leaving no doubt that this community created work of the highest caliber. The kindness, generosity, and support shared among members made it a community in the truest sense of the word, and one that we have loved being a part of for these past two years.

We wish we could have found a way to leave the site running for the benefit of the amazing folks who have made JPG what it is, and we have spent sleepless nights trying to figure something out, all to no avail. Some things you may want to do before the site closes:

- Download the PDFs of back issues, outtakes, and photo challenge selections. We'll always have the memories! www.jpgmag.com/downloads/archives.html
- Make note of your favorite photographers. You may want to flip through your favorites list and jot down names and URLs of some of the people you'd like to stay in touch with. You may even want to cut and paste your contacts page into a personal record.
- Catch up with your fellow members. Our roots are in this humble flickr forum and we recommend going back to find fellow members, discuss the situation, or participate in another great photo community. www.flickr.com/groups/jpgmag/
- Keep in touch. This has always been much more than just a job to each of us, and we'll miss you guys! We'll be checking the account jpgletters@gmail.com in our free time going forward. We can't promise to reply to every email (since we'll be busy tuning up our resumes) but we'd love to hear from you.
- Stay posted. Although the magazine is ceasing publication, we'll be updating you on what's happening with your subscription early next week.

We're soggy-eyed messes, but it is what it is. At that, JPGers, we bid you goodbye, and good luck in 2009 and the future.

Absolutely stunning. I thought it was going to be a bad winter, but now I'm wondering if any of us will have jobs by the summer.
Posted by Clint Gardner at 7:36 AM 4 comments: