I give you vacation action days:

Ok, that last one needs some more clarification:  my friend Jason Jones volunteers to work with developmentally disabled young adults at Art Access here in SLC.  A result of this work is a show where the assisting artist and the artist student display their work.  The title of one of Jason's student's pieces as the aforementioned Captain Phoenix.
Still, seems appropriate.
Posted by Clint Gardner at 9:16 PM 1 comment:

Labels: the youth of Argentina

Rhyming as fast as you can run: a meditation

I was listening to Jackson Browne's "Your Bright Baby Blues" and  I swear I heard one of the lines in the first verse was "Run as fast as you can rhyme."  I played it back immediately because couplings of words like that don't come along that often.  The line turns out to be more in line with the story the song is telling of the isolated observer watching people self-assuredly going places while the lonely singer-songwriter is pining either lost love, lost direction, or both:

As it is, the song is an interesting enough exploration of purpose and direction in one's life, but I am still intrigued by the misheard lyric: running as fast as you can rhyme.  It is the sense/nonsense notion that appeals to me in the line.   The juxtaposition of two disperate activities provides some interesting insight into both activities.  I like the idea of rhyming as some sort of physical activity, just as running might be seen as a contemplative activity; it is a sort of mind/body fusion that provides deeper insight into how we are as creatures with minds and bodies.

There is, of course, the opposite read of the misheard lyric:  that running and rhyming is an desperate act; something one does our of fear or because one is lost, much like the singer in Browne's correct lyrics.  The desperation of running without purpose, or, rhyming without purpose reaches deep into our existence.  No one, after all, wants to be running out of control for no reason.  Perhaps the same might be said for rhyming for no reason, as it were.
Posted by Clint Gardner at 11:01 AM No comments:

Woke up at two today.

Last night a thunderstorm rolled across the valley at midnight.  I watched it swell up across the valley, tendrils of lightning marking its path.  After each thunderclap, I swear I could hear people cheering from down the hill.  No doubt it was probably just me cheering the storm on.  It is the first real lightning we've had this summer.  It was nice just to watch the storm from the front porch.  I tried to go to sleep, but it kept on for hours.  To lay awake and listen to the storm is a rare gift.
Posted by Clint Gardner at 1:03 PM 3 comments:

This has been a peaceful, mind-clearing vacation so far.  I pre-determined (aside from a rather rigorous hiking trip to the Uintas) that I was going to completely relax as much as possible and, more importantly, do not much of anything that really isn't just about basic living or taking care of emergencies--and even those I've managed to calm my way through.  I came upon the idea of just relaxing and letting my life flow along a river while hiking along a river in the previously-mentioned Uintas.  It was a pretty freeing thought to just let myself wander down that river a bit, sloshing through shallow and deep mountain water, not worrying, but following the river and a friend who has the good sense to know when to break the easy trail and head into the dark forest for no reason.

That was week one of the vacation, and it was freeing and opening and, without being incredibly maudlin:  life sustaining.

This week is devoted to action--hiking back to camp, as it were, but not just walking back up stream.  This week is devoted to wandering in the woods around the stream--following a deer trail up a mountainside to find ice caves.  I'll lead myself for now, I hope to others who can lead me further along the trail.
Posted by Clint Gardner at 4:57 PM 2 comments: 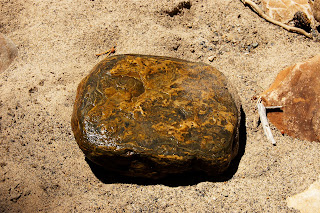 The rock lays open
On a river beach
Ready
To be broken
Again.
Posted by Clint Gardner at 10:36 PM No comments: