Everybody dance now!
Posted by Clint Gardner at 3:04 PM 3 comments: 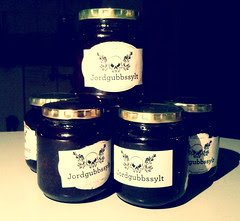 Many Northern European languages have compound words for strawberry jam. In Swedish (as we see in this photo from Simon Gate on flickr) it is "jordgubbssylt." The other Scandinavian languages are similar with the Norwegian "jordbærsyltem," the "refined" Danish "jordbærsyltetøj" and the decidedly Scando-archaic and non-compound Icelandic "jarðarber sultu."

Moving south, the Dutch offer us something closer to English with "aardbeienjam." The "jam" figuring prominently in that construction rather than the Scandinavian "sylt." The Germans take a decidedly European spin on Strawberry Jam by offering "Erdbeermarmelade" which, as you can see, is closely related to the Dutch in the "Erd" part, but take a decidedly Spanish spin by calling "jam" "marmelade." Many of the the southern Romance languages, you see, call any kind of jam a marmalade. Witness, Spanish: "mermelada de fresa,"

The French and the Italians are much more fancy in their naming of strawberry jam. The French say "confiture de fraises," and the Italians offer us "confettura di fragole." If you pretend you can speak either French or Italian, both of those phrases sound particularly high class and extra-sweet. Champagne comes to mind. Somehow I think the common folk of France and Italy have another word for strawberry jam that the official dictionaries compiles by snoots and even snootier snoots would have us see. You can sort of see that in the Spanish version of strawberry jam, mermelada de fresa, although it is still too uncompound. The Portuguese offer us "geléia de morango." While "morango" relates to the Basque/Finnish/Estonian Marrubizko/mansikka/maasikas, it still insists on making strawberry jam as a process, rather than a product.

Sure they all call the berry something unique, but only a few languages call the thing a compound thing "jordgubbssylt." Is one thing. "Strawberry jam" is two things.

What is my point?

Look at it this way: Northern climes experience about two months of summer at best. You have just a few weeks to collect and preserve those precious summer berries like strawberries. Those fruit are rare. The come and then go as equally as fast. No forgiveness for missing them.

So what do you do as a resourceful human? You find a way of preserving them. For berries, funny enough, it means putting them in more sugar, I've heard that sugar is, despite its smashing nutritional value, a remarkable preservative and antibiotic. Like our friend salt, bacteria can't seem to do much with food items preserved in desiccated sugar.

This is why we have ham.

This is why beehives survive unmolested by bacteria.

As you can see, the English word for "jam" is much more closely related to Dutch. The Dutch, however, kept their term for strawberry jam to be one word.

Strawberry is a lovely word. 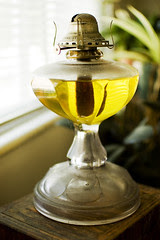 I'm ramping up to celebrate my Old West pioneer heritage this week. Here in Utah we have "Pioneer Day" on July 24, and it consequently gives us one more 3 day weekend then the rest of the country gets in the summer. This oil lamp is one of the few heirlooms that I got from my family. All I know is this one came from my Mom's family. I don't know much else about it, but I've posted a pic of the burner before. It was made by the White Flame Lamp Company in Grand Rapids, Michigan.

After processing the photo it struck me that at least I could have dusted the damn thing. My Mom would be very unhappy.

The chimney shattered awhile ago when I lit it. It wasn't the original chimney, by any means, as I remember my mom buying them all the time. I have no idea how the rest of the lamp survived all these years, given that it is glass and my brothers and I pretty much broke every piece of glass my mother ever acquired. I proudly carry on this familial tradition.

Keep an eye out for the annual re-posting of Dancing Brigham--so good it made the Cold Cold North cry!

Posted by Clint Gardner at 4:01 PM No comments: 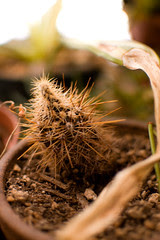 I think this cactus is done for, but I still keep it around. It is such a good photography model.

Posted by Clint Gardner at 7:23 PM No comments:


Snyder Mahler offers up an unexpected spin to the mobile poetry project:  an excerpt from the LucasArts video game Grim Fandango

primarily written by Tim Schafer.
Posted by Clint Gardner at 9:51 AM No comments:

for your consideration.
Posted by Clint Gardner at 10:44 AM No comments:


Come on people! I've done two now. Pump up the volume and add your own poem or favorite poem. Dial +18019300674. Identify the author of your poem and its title, even if it is by you. You might want to identify yourself too.
Posted by Clint Gardner at 12:24 AM No comments:

Mobile Poetry #1: The Death of See

A new SigNo feature for you: mobile poetry! Join the revolution and call in the poem of your choice to 801-930-0674. It can be your own work or a favorite of yours. Be sure to identify the author (even if it is your own) and the title. I reserve the draconian right to exclude any submission I see fit. The submissions will be featured here on SigNo.

Posted by Clint Gardner at 12:48 PM No comments: