To the mayor of a small village in Chihuahua

Dear Mayor,
Signifying nothing can indeed help you with your problem of marauding banditos terrorizing your once-idyllic village! Believe it or not, it is rather common for villages and small towns all over the Old West to be regularly raided by bands of ne'er-do-wells and ruffians. They regularly rob banks, start saloon fights, gun down unsuspecting and innocent farmers, and dare to impinge upon the sacred honor of womenfolk.
Rest assured, my dear Mayor, the experts from Hollywood, California have long been working on this problem and have come up with a solution! Mr. Mayor, your only salvation is to go out and find a lone gunman, who, while seeming to be despondent and angry on the outside, is willing to take on the bad guys preferably in a single-minded showdown where he will expertly pick every single one of them off until he gets to the leader who will die a suitable and often ironic death. This lone gunman must necessarily have his wife and small children killed off by either an Indian raid, or even more effectively, by similar banditos to the ones pestering your village. It is an added bonus if they are the same banditos, given that revenge is even more sweet for him and for you. This rarely happens, however, as the banditos and outlaws tend to lead short, although exciting lives, and are, apparently, a dime-a-dozen.
Once your hero has cleaned up the town (and hopefully not burnt it to the ground) do not, under any circumstances, expect him to stick around and become a regular citizen. Although the remorse for his dead wife or fiance or children or brother will be exorcized, he will still feel the need to wander off into the desert, never to be seen or heard from again.
Besides, you wouldn't want a violent son-of-a-bitch like that sticking around your idyllic village now would you? I mean look what happened to Big Whisky when Gene Hackman outstayed his welcome. They had to bring in Clint Eastwood to clean up that mess.
Posted by Clint Gardner at 9:15 AM 2 comments:

Where the wild things are

This is City Living
Originally uploaded by Douglas Roesch

Flickr contact Douglas Roesch indicates that Pittsburgh is being overrun by turkeys. I can find no relevant news stories by googling "pittsburgh turkey invasion" but apparently Pittsburgh has an annual Turkey Trot sponsored by the YMCA. I doubt this is the type of trot they are referring to.

I recall a few years back we had the year of the raccoon in SLC. The blackeyed critters were everywhere. This year may be the year of the Mormon Cricket, given the wet spring weather we are experiencing, and that wee beasties proclivity to procreate under such conditions. An invasion of cougars would be cool, but I fear too many of the concealed weapon carries of Utah would take vengeance on the big cats.

Family lore suggests that my ancestors had similar ambitions as Laird Barclay. Perhaps, these feats of strength and endurance are or were just a Scottish thing. My illustrious Scots ancestor had many reputed hikes and walks and jumping over broomsticks.
I can still jump a broomstick at 3 feet standing still (as could he of polygamous fame) and can hike mountains.
Scotland! We are a hearty people. I guess it makes sense.
Fascinating fact #8: "Pedestrian" used to just mean a racer who was on foot, as "equestrian" was a racer who raced on horseback. Fascinating!

While I was on the bus and reading about Captain Barclay in The Lost Art of Walking by Geoff Nicholson, I had a brief fantasy of just taking off on foot for a vacation and see where I ended up. Could be fun. It fits my heritage.
Perhaps I will jump over a broomstick or two on my way.
Posted by Clint Gardner at 5:53 PM 3 comments:

What did Jesus do
The day after Easter?
I mean the Gospels
Aren't so clear on that
Subject

After a busy weekend of
Dying an excruciating
Death: scourged, crucified,
Stabbed in the side for
Blood and water to fall
To mother Earth
And give salvation to
Mankind (all that on
Friday, mind you)

Then, according to
Catholic magesterium,
Harrowing Hell of all
The righteous prior to
His ministry on Earth
All day Saturday
(The reception line on
That one must have taken
Most of the afternoon)

Then rising in
A flash, leaving only
The imprint of His
Humanity on a disputed
Shroud

What did Jesus do
That fine Monday morning?

I prefer to think
He took a vacation
In Tahiti or Samoa
Lounging on the beach
Not worrying about
A single thing
But loving and living
Life eternal and blessing
All the little sea
Birds that flitted
By his beach chair.

Becoming God Almighty,
Afterall, is no easy
Task. He deserved
Some time off.
Posted by Clint Gardner at 6:25 PM No comments:

"What do you have to offer?"
They ask with slavering lips
Mindful of the last bit of beef
They ate, now stuck in their
Teeth

"What do you have to offer?"

"Uncommon sense and a liking
For clouds that rim blueberry
Against a cold sky."

A stupid answer but it seems to
Impress.

In the meantime they find a
Toothpick.
Posted by Clint Gardner at 9:55 PM 4 comments:

Signifying nothing can indeed help you with your problem of having no problems! Believe it or not, it is rather common for people not to have problems. Many people lead perfectly ordinary (if not somewhat boring) lives one hundred percent problem free! As you can imagine, this situation is quite problematic.

Researchers are committed to solving the problem of problem-free lives. They currently are testing rats to maximize their failure rate at finding tasty bits of cheese in mazes with the eventual hope of extrapolating their findings to human beings, given that we all know that cheese is the most problem-free food.

The government has for many decades now taken the lead in finding ways to distribute problems equally amongst the populace. With the recent change in the federal administration, however, the direction of those efforts has changed significantly.

Take heart, caller, you are not the only one with no problems. Support groups for the problemless can easily be located in swim-up bars at tropical resorts, and beautiful sandy beaches on Hawaii or Tahiti.
Posted by Clint Gardner at 2:14 PM No comments:

Having a problem? Signifying nothing will help you out!*

Another fine service brought to you by Signifying nothing. Who says I don't do anything for you?

*Answers will be posted on signifyingnothing.com whenever I get around to it. All submissions are subject to being posted here. Beware. Be very aware.
Posted by Clint Gardner at 7:10 PM 2 comments:

I enjoy this picture 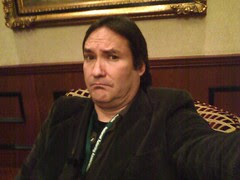 163/365: another fancy hotel lobby
Originally uploaded by Theorris
Posted by Clint Gardner at 12:57 AM 4 comments:

This song interferes with their
Ability to love

Wait a minute, that's not how
It is supposed to be

You know the song of songs?
Are you the hart or are you the doe?
Do you kiss with the kisses of
Your mouth?

It takes a minute to recover from that
A soul ticking minute.
Posted by Clint Gardner at 9:47 PM No comments:

And you wonder why

It is a contest: guess what this map of consumption is defining.
Posted by Clint Gardner at 9:40 PM 15 comments:

Each night we baptize
Spoons and cups and dishes
Washing them clean of filth
Readying them for another day
Of sin
Posted by Clint Gardner at 10:54 PM 2 comments: