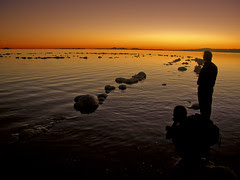 Nearly there
Originally uploaded by Theorris

I spent a large portion of the long weekend learning what I should have known about PhotoShop a long time ago. When I took these pictures of the Spiral Jetty back in 2002, I was sorely disappointed in how they turned out. My camera color-corrected the hell out of them and the sky lost all of its saturation. Needless to say, I was quite disappointed that I wasn't able to catch the intensity of the sunset. It was certainly one of the most surreal, ethereal moments I've spent on the planet to date.

I was quite pleased, however, to learn that PhotoShop could come to the rescue on badly exposed image. This rendering of the scene is as close an approximation of what this really looked like at the time. The sky, however, needs to be more raspberry, but this is as close as I can get now.

Expect to see more of this image and its Spiral Jetty companions over at flickr as I refine my color processing technique.

This really is what it looked like. Stunning, isn't it?

As per Conidment's request, here is the original: 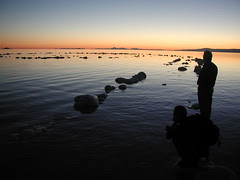 Note how blue the sky is and how the saturation is next-to-nothing. It was not like that at all. It was that intense. My camera was trying its hardest to make the scene look "normal." Stupid camera.
Posted by Clint Gardner at 11:00 AM