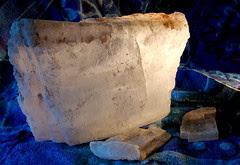 My grandfather was a prospector in Southern Utah and consequently was a rock hound. He had thousands of specimens which he would enter into mineral and rock shows.

Here is one of his specimens, a piece of selenite (a gypsum). It was not the easiest thing to photograph, as I wanted its translucence and ability to spread light to be shown. Selenite is the same chemical composition as alabaster, in case you wanted to know. Selenite is just the clear, well clearer, version of it.

You can see some of my grandfather's rock collection and his entire arrowhead collection at Southern Utah University.

Posted by Clint Gardner at 8:59 AM