We can prevent this! 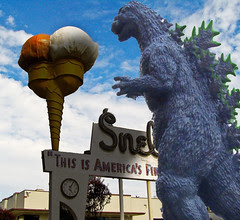 We can prevent this!
Originally uploaded by Theorris

Sugar House in SLC is under attack yet again: the historic Snelgrove sign is the latest Sugar House landmark under threat. The sign, for those not in SLC, is on 21st South, just before 9th East. It has been there for decades and used to advertise the Snelgrove Ice Cream store that was one of the last pure ice cream fountains that saw its heyday from the early 20th century until about 1950. The Snelgrove store hung around until the late 80's/early 90's when Snelgrove sold their brand to Dreyer's. Dreyer's quickly ditched the store, converting it into corporate offices.

The plot thickens now, since Dreyer's has decided to abandon the Snelgrove brand in favor of its own. This, in itself, is not problematic, but, unfortunately, Dreyer's apparently wishes to so de-brand Snelgrove that it is going to remove this famous Sugar House landmark.

Albeit Dreyer's is seeking to give the sign to a local group, but failing that, it seems the sign's future is in peril. It would, of course, be better if the sign stayed where it was at, but if Dreyer's is bound and determined to remove a local landmark all for the sake of "branding" then so be it. The sign, however, should be preserved--preferably on 21st South somewhere.

Don't let them do what they did to old Sugar House to the Snelgrove sign! See the Sugar House flickr group for more information.

This is what I just sent to the KSL TV and Radio news directors to get some media attention to the matter:

As KSL has reported, Dreyer's ice cream has decided to discontinue the Snelgrove brand altogether, and replace it with Dreyer. An acquaintance of, [arts enthusiast], was concerned about what Dreyer's was going to do with the historic landmark Snelgrove sign in on 21st South in Sugar House. She, therefore, wrote to them and inquired about the future of the sign (which was, by the way, recently damaged without explanation). She received the following reply from Dreyer's:

> Dear Ms. [arts enthusiast],
>
>
> Thank you for visiting our website and for your
> e-mail message. It is always a pleasure to hear
> from our consumers whose ideas, comments and
> concerns are very important to us here at Dreyer's.
>
> We appreciate your loyalty to Snelgrove and its
> significance in the history of your area. We hope
> you will be happy to know that Dreyer's is presently
> in talks with a handful of local historical
> societies to see whether we can donate the sign so
> it can be enjoyed by generations to come.
>
> We are delighted to hear that you feel Dreyer's
> produces delicious ice cream. Please watch for our
> follow-up response to arrive shortly by U.S. Mail,
> some coupons for future purchases and a current
> flavor list. We appreciate your interest in our
> company and the time you have taken to contact us.
>
> Sincerely,
>[name withheld to protect the worker]
> Consumer Response Representative
>
> Ref # [withheld]
>

As you may note, Dreyer's is apparently not interested in preserving this landmark on their sight--a sign beloved by many Utahns and an important reflection of our community values.

I believe that the future of the sign is worthy of a story on KSL. It would be interesting to know, for example, who they have contacted to preserve the sign and where it would end up eventually.

Of course as a life-time Utah resident, I am interested in keeping the sign where it is at, but if Dreyer's insists on removing it, I fully understand that it is their right to do so. I believe, however, that it should be preserved.

Now, of course, it is up to you if you think this story is worth pursuing. I believe that many Utahns would be interested in the fate of this sign, given that Sugar House has undergone some very tumultuous changes in the last decade.

Arts Enthusiast is going to write to the Utah Historical Society and to SLC Mayor Ralph Becker.

I suggest that if you're interested in preserving a bit of SLC history, you write to someone too.

So is my current blog theme of "Justice" an uncanny prediction of events I'm currently engaged in, or unduly influencing my recent mondo-political blogging?

Thanks again to Cunaldo for sharing his image "Godzilla's Profile" under a Creative Commons license, share and share alike.