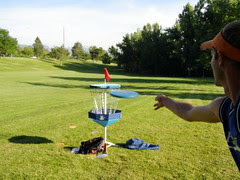 Portable Disc Golf
Originally uploaded by Theorris.
LateJC aka Catinlap purchased a portable disc golf basket which we put to good use yesterday evening in the East end of Sugarhouse Park. Go to Discarama and see more adrenaline-filled pictures!

The park, as you can see, is terribly over-watered. I believe that the water they use, however, is pretty much only designated for Sugarhouse Park and when it runs out the park gets no more water. I am not 100% certain of this. If you wander through any part of Sugarhouse Park, however, you will note that the grass is pretty much soggy a lot of the time. This differs markedly from the park just down the way (Fairmont) which is not over-watered (or even moderately-watered). SLC Salt Lake County Parks Department has some weird fetish for Sugarhouse Park and its grass.
Posted by Clint Gardner at 9:21 AM