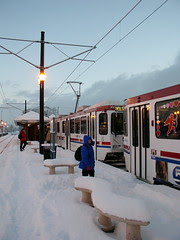 Arrived
Originally uploaded by Theorris.
It has been snowing since yesterday with little break. It is the first appreciable snow we've had for two years. Last year, and even earlier this year, all it seemed to do in the valley was rain. That's mostly annoying if you like snow as I do, but wonderful if you are like lis who hates the snow and the cold.

For a moment I thought it would have been a snow day for school since we haven't had snow like this for so long and folks here tend to get jealous of places that completely shut down in even the slightest amount of snow or ice. But no--the True West has taken over and most folks head out into the storm to get to their jobs or school or whatever. People leave early and drive slow (mostly). Snow plows are out all night, cutting their way through the streets.

Despite its inconvenience and cause for caution most people seem to be in a good mood this morning. Folks wave to each other as they shovel off their cars. Bus stop waiters chat about the weather and the cold and joke about weathermen.

Yes, the snow smooths things over--even people. They fail to see the cold and the bleakness of winter and succumb to the magic of snow that, overnight, has exploded out of the nothingness of clouds and cold.
Posted by Clint Gardner at 9:27 AM