How rock bands break up 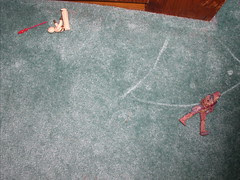 How rock bands break up
Originally uploaded by Theorris.
I came into the Creative Arts Emporium & Sunny Lounging Room this afternoon and discovered that there has been dissention between Wook and a member of the Family Stone. Barely a week after the band formed, Billy Sandcreature took it upon himself to set Wook straight on a few points with a stolen Wookie fire staff. Wook put up a good fight, but as you can see, suffered injuries that rendered him unconcious. Fortunately for Signifying nothing fans, both have suffered no lasting ill-effects.

Wook has been quoted as saying about the incident "Wah wah wahhhhhhhh!" while Billy Sandcreature retorted "Arrr arrr arrrrrrrrrrrr!" There has been no word on the status of the rest of the Family Stone.
Posted by Clint Gardner at 2:06 PM