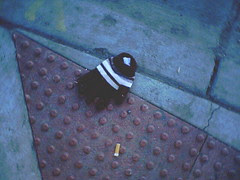 Lost
Originally uploaded by Theorris.
lis of the famed Asertively Unhip recently discoursed on the film Grizzly Man directed by Werner Herzog. While some (see comments at AU) find the protagonist annoying or bothersome because of his behavior, I found myself not so much deep disturbed by the subject matter an the person portrayed, but disturbed by Herzog's technique. Now disturbed is probably not the right word because it has negative connotations. I was distrubed in a good way; kind of like one is disturbed in Act III of Much Ado About Nothing when Shakespeare refuses to show the scene that most other characters witness in the play that supposedly proves that Hero is faithless and carrying on an illicit affair with Borrachio, a character who is in league with the play's bad guy, Don John. In Grizzly Man Herzog, taking mostly footage that Timothy Treadwell, the aforementioned annoying protagonist, shot and spun it together in such a way that you get a far better sense of the man and the bears he proclaims pretty much every time he is on the screen have saved his life.

Herzog plays with the irony here: that which Treadwell claims to have saved him ultimately kills him in the most gruesome way most humans can imagine--to be eaten alive. Herzog does this through narration at times, but more so through how he edits the scenes together and what he decides to let run on in the film. Ultimately there is a lot of discomfort with the editing in that where you (and even Treadwell) expects to be cut to another scene, Herzog leaves the scene alone. This is most evident in Treadwells many solioquys where he talks about his life and the bears and who he is. Where you expect a flashy cut to another scene or a cutaway of bears, Herzog leaves it alone, forcing the viewer to come to terms with Treadwell's mania.

Such editing is not new for Herzog, in The White Diamond an equally uncomfortable movie, Herzog carries on filming his subject (a man who is developing a blimp to study the rainforest canopy--the titular white diamond) even when that subject is seemingly done talking. Because Herzog asks no other questions, but keeps the camera on, the man often continues on with his narration of his life and why he is doing what he is doing, and by doing that shows something to the viewer that perhaps he did not want to show: a dark obsession to complete this project no matter what it takes. He needs to complete this project not simply out of a desire to conduct research, but seemingly to assuage himself of guilt he feels from his first attempt years before where his friend and well-known camera man died because of a failure of his blimp. Like Grizzly Man Herzog refuses too to show the death scene, but the film is saturated with the moment. You see the reaction that people had to the event, but not the event itself.

The choices that Herzog has made in this film caused me to step back from it more aware than ever of our obsessions and our endless need to make peace with some unknown past. Treadwell does that over and again throughout the movie--never quite getting there as he mugs for his camera. Yes he is in it for the bears, but he is also very much in it for himself. I'm fascinated how Herzog by making the film that he made, forces us into that confrontation as well.
Posted by Clint Gardner at 5:41 PM