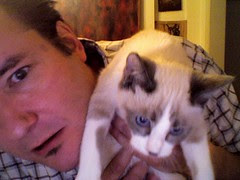 Early this morning, my neighbor came over with a curious box in hand. It contained the above cat. Apparently a friend of hers obtained the cat, but that friend's husband was go-to-the-emergency-room, epi-shot level allergic to cats. She wondered if I could take the cat, since he was scheduled to be euthanized in a couple of hours.

What the hell can one do when one is called to an act of humaneness so early on the Monday morning before Christmas?

"Tango" (a name which I don't particularly care for) has settled in nicely the hour he has been here. Even the other cat doesn't mind him, and seems to want to play. That's a far sight better than he usually is with comrade cats.

Its a Festivus miracle!