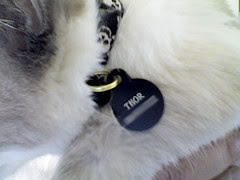 So Thor's full name is

"Regulator Johnson is his wrestling name.