I was bemoaning a couple of weeks ago to friend and secret Signifying nothing reader Elisa the Snuggie that allows you to look like a blame fool in the privacy of your own home: 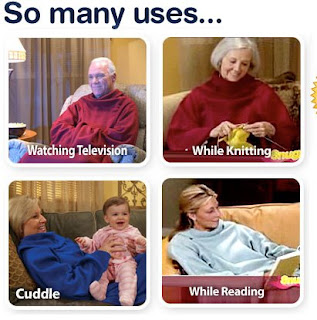 Elisa was aghast at this product (which she had seen advertised on television), so much so that I threatened to buy her one. I know she secretly wants one. Who doesn't want to look like a gaudy Capucin monk watching television, knitting, cuddling, or reading?

Yet again given the artic blast we're going to experience this weekend, the Snuggie might not look that bad.

Nah. It is the clothing epitome of "Put a Donk on It."
Posted by Clint Gardner at 7:20 PM