Pulling Mussels (From the Shell) 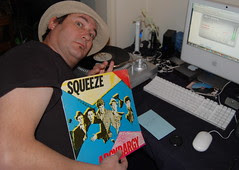 39/365: Pulling Mussels (From the Shell)
Originally uploaded by Theorris

I've been meaning to get a USB record player goober for some time now. Today was so dreary here in good old SLC, that I decided to pry open my wallet and go for it. I have some various vinyl laying around and want to digitize it so that I'll not be tempted to just buy it online. Screw the RIAA, I say. I'm surprised that they don't come after outfits that produce these LP to digital devices.

Most of my teenage music sucked, but I did have some taste. Most of it, by the way, is on either CD or tape. I'm not that freaking old. My sister, however, is that freaking old, so I'll have to get all her stuff over the holidays.

The tapes, I might add, are long gone: they demagnetized rather quickly.

Posted by Clint Gardner at 4:52 PM