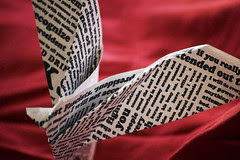 Over at zefrank.com, Ze Frank has a new project based upon another project (52 to 48) that stirred up a lot of anger from some in the 48. Basically the project was meant to bridge the divide in politics. Ze, however, got a tone of angry emails. In the spirit of the original project, he decided to not let that anger get to him, so he made a "Angrigami" project (http://www.zefrank.com/angrigami/, www.zefrank.com/angrigami/about/) where you can take the angry vitriol and fold it into something else. I chose to fold a dove. Well its supposed to be a dove, anyway.

Posted by Clint Gardner at 9:38 PM