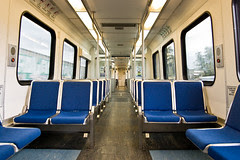 I've been riding Salt Lake City's light rail since it inception in 1999 and I've never, ever been the only rider in a car during the day. I suppose it could have something to do with the rain and the fact that this was a train headed to the University of Utah (the other ones head downtown to the "Intermodal Hub"--that's where I took the pictures of Front Runner earlier in my stream). TRAX, in fact, seems to be busier than ever now that gas prices have forced my of us poor working Joe's to either take out a loan to fill up our cars or lump it and take mass transit.

In any case, it was nice to be the only person on the train, as it allowed me to snap photos with abandon. I generally don't like taking pictures of people without their permission in confined spaces that move at 70+ miles per hour with no possibility of escape.

The graffiti on your left is typical of the TRAX corridor. I set my speed a little slower to get some blur.

The more I look at this thing, the more it reminds me of Kubrick.