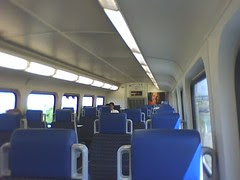 As you can see the train car is quite empty. There was only one other guy on the upper level of the car when I got on--he gets regular calls on his cell phone and is prone to say "anywho." He won't force me to put on my headphones, however, as I want the whole experience to be not mediated by a soundtrack. (Well, on my way back to Slick City, I will probably listen to music.) Boarding at the Wood's Cross station was a mother and her teenager, and two LDS missionaries. A Union Pacific train kept up with us for a while outside of Farmington station. A flat bed featured a rather lurid depiction of a naked woman. The missionaries kept glancing at it and looking the other way.

As you can see, local newscaster Nadine Wimmer joined us. Her massive head seems perfect for TV. She will not, however, quit smiling.

Actually I used to work with Ms. Wimmer. She is actually a rather tiny woman.