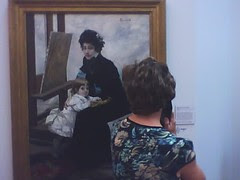 I was accosted later by a guard taking another picture of a man looking at the giant casting of the Rodin's Burgher's of Calais head and told I had to delete the picture. Funny that: the Utah Museum of Fine Arts (UMFA) is public property and Rodin is not under copyright. They also had nothing posted that stated no photography was allowed. I've been to many museums around the US and none seem to have a problem with cell phone pictures including puny institutions like the Metropolitan Museum of Art in New York. The only issue that usually comes up (and it is clearly posted in most museums) is when a work's rights are still held by the artist, the artist's family, or some right's holding organization. The UMFA and/or the Cleveland Museum of Art (who owns this collection) is being pretty presumptuous about their rights to control images of works they do not own the rights to particularly in a government funded institution.

Posted by Clint Gardner at 5:09 PM