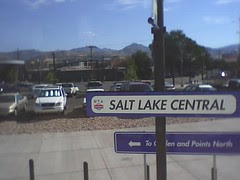 I have a few days off from work, so I decided to use one of my days on a photography excursion to Salt Lake's step sister to the north, Ogden via UTA's FrontRunner train. I took my normal bus/TRAX route downtown (via the University TRAX line) and arrived at the Salt Lake Intermodal Hub at 10 am sharp. Having been to the hub once before to take shots of the train, I knew approximately where the ticket stations were. The one I approached, however, seems to have become discombobulated, because it didn't react to my touch. I then ventured to another ticket station down the way where I proceeded to purchase my ticket. As I have a pass, I was pleased to find out that a round trip ticket was only 7 bucks. I suppose that is a discount as I thought the ticket to Ogden was 5 something each way. I was interrupted in the process of buying a ticket by a grandmother with grandkids in tow who asked me how to operate the ticket machine. "I have no idea," I said, and she quickly figured out that I too was a tourist. After retrieving my ticket, I chose the train car on nearest the train, and climbed the stairs to the upper deck. I chose an eastside seat so as to have a better photography perch of the cities and towns we shall pass. On the way back, I'll sit on the other side to get pictures of the Great Salt Lake.

We've just now pulled out. I was a bit disappointed that the conductor didn't shout "all aboard" as they still do on AMTRAK trains. Ah well.

So far we're going slow, and the FrontRunner rides like a 70's Cadillac: smooth and boat-like.