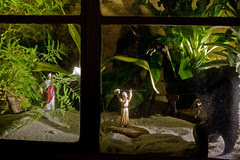 OK, there is a long story in this, but regular readers/viewers of signifyingnothing.com, may remember The Mummy's Revenge, a short movie of woe and intrigue starring Jesus, The Mummy, Billy Sand Creature, and Rancor Wilhelm. Basically The Mummy pissed off The Rancor, The Mummy prayed to Jesus to save him, and Billy Sand Creature was Jesus's second. There is a moving scene of Jesus carrying Billy, after he was slammed into death by The Rancor, before the final show down where Jesus, employing the full Heart of Jesus, puts a full salvation move on The Rancor complete with lightning bolts.

It was very sacrilegious and very offensive to both Christians and Star Wars faithful.

This is a revival of the Wilhelm Window Well, that had gone to pot for a couple of years. It was revived by one hell of a hot Saturday and some free plants.

You can't wait for WWWD2, can you?