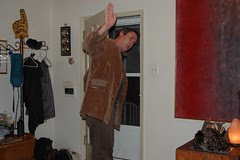 I intimated previously on flickr that my last picture for the accursed 365 day project wouldn't be anything special or any more thought out than any of the other ones. My impetus for thinking or plotting these 365 day pictures flagged within the first week or so. It was much less stressful and actually more fun just to snap a picture from a moment's inspiration. That's why, as well, there are mostly camera phone shots. It seems like a huge waste of time to gussy these 365 things up.

Anyway--it was sort of fun and I will never do anything like this again. You will also not see a self portrait of me for some freaking time.

I spent my commute in this morning thinking of what new photo projects I want to take on, now that this beast is behind me. I am still thinking about using the Shipler collection housed by the Utah Historical Society. The Shipler family took photos around SLC from the late 19th century until the mid-20th century. My idea is to figure out wherever the photographer took them from and re-image them to show what's happened. I've tinkered with it a bit in flicker in the past, but nothing spectacular emerged. (I took pictures of the 11th East corner before the nimrod tore it down, and compared it to the Shipler photos.)

Or I might just go for a 730 Day self portrait project!

Posted by Clint Gardner at 7:02 PM