Musing on Fairs of States 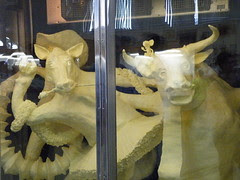 How could I miss the State Fair for 10 years in a row now? I used to like going to the fair--particularly visiting the animal stables, and admiring how their owners had preened and spiffed up beyond recognition their cows or sheep or pigs. Further on, the chicken house was always unbelievably noisy, given that chickens are perhaps the noisiest bird known to man (save perhaps the previously-mentioned magpie) and not only cackle, but crow, and guffaw, and screech through most of the day. I also quite enjoyed going to look at the prize vegetables and wondered how in the hell they could get them to last not just through a county fair but through a state fair as well. It was a wonder of modern agriculture to me. Of course I never considered that they put in different vegetables to replace their county fair winning entries, but that would take the magic out of it. Then, of course, there are the oddities of the State Fair--the butter cows and the two headed pigs and, yes, the bearded ladies. Top that off with a heaping portion of fried food of every kind (yes they do make fried Twinkies) and you are set for one memorable experience.

After ten years, it eludes me how I could miss 3 whole weekends of State Fair. Why was I not drawn by the buttery goodness of the butter cows? Why did the cackling of the chickens not call me home?

Posted by Clint Gardner at 3:16 PM