We are the land 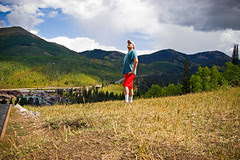 331/365: I claim this land for everyone
Originally uploaded by Theorris

One of the best things about the Western United States are the vast tracts of public land. Those who live or have lived in other parts of the United States or other countries where public land is rare certainly can understand the crushing limitations when most of the land is privately held. While there may be arguments about its use, one would hope that the principal of public land and the freedom it represents will be continued in the West.

Public land, such as shown here up Big Cottonwood canyon near Salt Lake City at Solitude Ski Resort, can be put to multiple use. Not only is it a forest with a plethora of plants and animals, but it can support a ski resort and my beloved disc golf course. Of course, such multiple use of land use must be in moderation and conservation should be kept in mind, lest we lose this precious commodity. I do not use the term "commodity" lightly. One should be careful in talking about the spiritual qualities of land, given that the spiritual can be so easily discounted or refuted. To talk of value of the land (and perhaps spirituality) in economic terms is essential. The land does have intrinsic value beyond the minerals, the trees, or the recreational value it represents. It is difficult, however, to put that value in terms that don't sound hokey or hair-brained, but I attempt to.

We need such open space and non-owned land. It is a part of a full human life to wander the wild (or not so wild in my case.) My point is that we can conserve our natural resources and our open land and make use of it too.

As for the picture above, yes it is a joke, but I really do believe that this land belongs to us all. As Frost said, "The land was ours before we belonged to the land." In other words, we may think we posses the land, but it will, in time, posses us all.

Posted by Clint Gardner at 4:09 PM