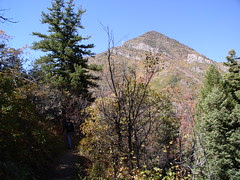 Wasatch from Desolation Trail
Originally uploaded by MacClint.
The nice thing about my job is that I get random holidays like Fall Break where I can catch up on what's going on in the canyons above SLC. I briefly thought about going out of town, but sometimes it is nice just to be home and take things as they come. After some debate, Karmaking and I decided to go for a hike up Millcreek Canyon. The debate was more about which canyon would be best. I think we chose Millcreek simply because it was closest.

We stopped at the Desolation Trail just above the Boy Scout camp and I regailed Karmaking of stories from my work at that camp guiding 11-year-olds as a world-wise 14-year-old camp staff member. I amused K. with tales of a crazy racoon, kids who broke their arms because they didn't listen to me, and how I disposed of the rattle snake we had

caught in camp (I took it up the same trail and flung it out in to the woods.) King was intrigued how one would handle a snake, and I told him about the crafty use of a forked stick and gloves in snake handling.

As King noted as we were driving out of the canyon after the hike "it was like being in another world." Indeed.

There are more pics over at Flickr.
Posted by Clint Gardner at 7:32 PM