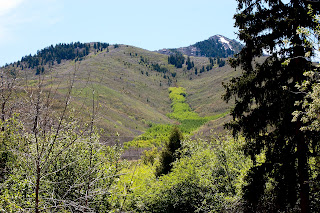 listen to ‘Washington Park’ on Audioboo


It was another extremely temperate temperature, with partly cloudy skies.  The park itself is an oddity, really.  The trees seem to be a mix of native, box elder, scrub oak, and pine; as well as non-native shrubs such as lilac and currant. 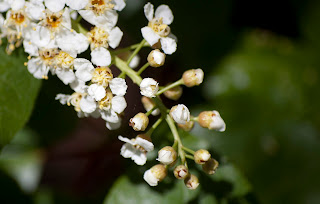 Paper mulberry, however, is native.  I know this without recourse to the Internet, since on the farm where I grew up we had a paper mulberry bush near our duck pond.  It was shaded by a standard mulberry and some wild rose bushes.  Now, you must realize that our farm was in the heart of the Salt Lake Valley and the paper mulberry is not native there.  That particular paper mulberry was transplanted by my grandfather from an uncertain canyon surrounding the Salt Lake Valley.  My father was very specific in his recollection of how the bush came to be when it would bloom each spring.  Seeing the familiar flower in the Wasatch caused me to think of my family's connection to place. We've been here for over 160 years now.  That would be eight generations?  We're just at 7, as far as I can tell. 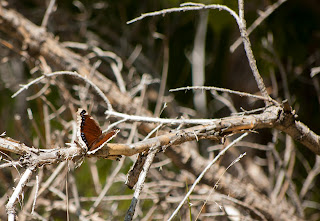 I wandered about the place for a while.  It is an odd place, really.  The native trees hovered over non-native grass and swing sets, hibachi's and picnic tables.  Still, the butterflies didn't seem to mind.  They flitted about and left me unable to take a proper picture until one decided to land on a winter-felled box elder branch.  I could see the golf course through the trees.  I don't think the butterfly, or moth (as it may be) could, however.  I think their optical ability is somewhat limited for that, but I'm sure the ultraviolet view they enjoy is non-the-less spectacular. 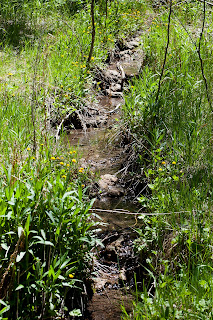 I wandered east in the park to where it met up with the Mountain Dell Golf course that borders it to the north and headed back to the wild-looking area that surrounds the conveniently located rest rooms at the gate of the park.  Westward from there I came across a sudden creek.  Buttercups hugged the margin.  The I-80 noise was louder here than any other part of the park.  Cars and motorcycles screamed up the Parley's canyon grade, and the occasion basso profundo Wotan yell of a diesel's engine brake cut the stream gurgle.  The highway noise fit Washington Park well, I think.  As I said, it is an odd park.  The Natural is side by side with the unnatural--the Man imposed.

The stream that I found was near, as fall as I can tell, an old house.  I didn't see any foundations or remnants of that house, other than several lilac bushes:
Lilacs were a favorite flower of pioneers and was my mother's favorite flower.  I thought of her on seeing them with their heart-shaped leaves.   The trinity that Whitman mentions is the trinity of Mother/Father/Child.  Love.

There was some other signs of us at the site:  beer cans and butter cups, but one strange placement puts it all together: 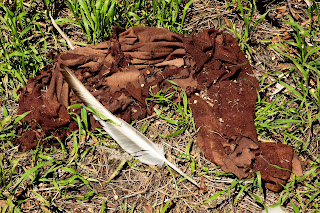 That is a decrepit sweat shirt and a hawk feather.  I have no idea the story behind the sweatshirt and several horror story plot lines flitted across my mind when I studied the scene, but I think it is the feather that is more baffling.  Did a hawk land here and in some struggle with its prey lose a feather, or, more likely, was it preening the nearby tree and pluck out this feather like we pluck out irritating nose hair?

Is that even possible? 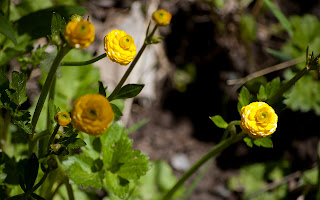