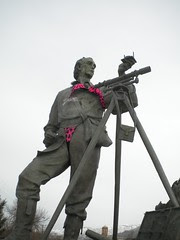 Kids these days
Originally uploaded by Theorris
My normal week-day walk usually takes me past a statue of Parley P. Pratt. The statue was erected in his honor to honor his contribution to local history (and place names), since he built the first more easily passable road into the the Salt Lake Valley through the Wasatch Mountains. His fame as a builder of roads is celebrated in the statue, rather than his scandal-tainted death in Arkansas (q.v.). To be fair, however, some see his death as martyrdom, and I would not wish to fan the flames of religious acrimony. Pratt was certainly a person of his times, and Mormonism was particularly controversial at that time. Of course no one deserves death for either their religious beliefs or for seemingly scandalous behavior with women in Arkansas. Whether Pratt deserves a statue, is certainly not up to debate for his proud descendants or for most people in Utah, it would seem. Statues certainly been erected for much much much worse human beings.

In spite of Parley's fame (or perhaps because of his infamy, which I doubt anyone really knows about) local teens often take it upon themselves to decorate him with a variety of items. At Christmas time he generally is donned with a Santa cap, and at Hallowe'en, a pumpkin is usually placed on his transit. Aside from these rather innocuous seasonal celebrations, however, I've witnessed poor old Parley festooned with a variety of items: a 40 of Michelob, or a Playboy Center fold hanging from his outstretched hand, for example. Invariably such risque paraphernalia is quickly cleared away by someone in the neighborhood who keeps and eye on Parley's virtue.

I hadn't ever seen, however, until the other morning on my daily walk to the bus stop, Parley sporting a hot pink thong bikini. Later when I was laughing again at the audacity of the kids who played dress-up with Parley, I jotted the following on my notepad:

Like God, kids these days
Are no respecters of person
Heroes included.
Posted by Clint Gardner at 4:35 PM