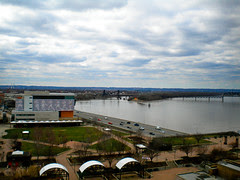 Float Like a Butterfly
Originally uploaded by Theorris
My travels took me to Louisville, Kentucky this week. Louisville is an unassuming city. Like most American cities it seems to strive for the gaudy and the fantastic, yet at the same time seems to want to maintain its simplicity, while trying to understand its past.

The mighty Ohio river borders the city to the North, and my hotel was smashed up against its banks. Despite an unfortunate decision made decades ago to place a major highway along the banks of the Ohio, the simple quietness of that river overwhelms any human presence.

I watched a coal barge saunter down river with nary a sound from my 16th floor hotel room. The passing traffic was no match for its silence as it carried tree branches the size of small houses across its muddy depths.

My room looked out on Louisville, toward the river and, most prominently, the Muhammad Ali center, with its pixilated boxers who noisily float like butterflies and sting like bees.

Ali was the boxer of my childhood: a noisy man trying to shout down the cacophony of oppression in the heart of an oppressive era.

The silence of the great river overcomes even Ali. The river rolls on, but the hope remains. Dead trees are carried downstream to the sea, eventually, where they will be interred.

While thinking of the now silenced Ali and the river of his homeland and my country, I wrote this on the hotel stationery: