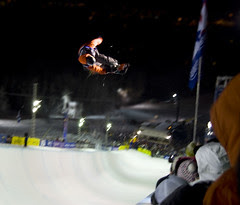 The 2010 U.S. Snowboarding Grand Prix was held at Park City January 22 & 23, 2010. The event served as the final round of qualifiers for the U.S. Olympic Snowboarding team. I am fairly confident this is Jack Mitrani, although I didn't take notes during the competition.

Posted by Clint Gardner at 1:59 PM