Go Jazz! or I'm still not too old to get worked up about meeting a basketball legend

Ok, so maybe Ron Boone is not a legend in the eyes of many, but he was an all star in the old ABA 3 times over for the Utah Stars (go stars!) and I remember watching him play when I was a kid. I believe, as well, that Booner is high in the NBA record books for best free throw percentage. After he left the ABA he played in the NBA for 8 seasons and ended up with a .830 FTP. In case you don't know, he now serves as a commentator on Jazz games.

Now what is all this leading to, you ask? Well tonight I had the opportunity to meet Booner at a social function. I didn't delve to much into asking him questions about his career or even about the Jazz, fearing that it would be tedious for him. I am kind of kicking myself now, however, for not mentioning my fond memories of the Utah Stars as a kid.

I did, however, bring up the topic of the dearth of Jazz games on broadcast TV this year. The League, he stated, wants to shift in the direction of having more games on FSN or other such premium cable packages. He was genuinely concerned, however, that many fans would be excluded from viewing games in their homes. It gave me a good chance to make a joke about now being required to visit the bar quite regularly.

He laughed, as did Middlebrow, who was also in the conversation. Middlebrow, of course, has much more basketball cred than I do, being that he is multi-time County League champion.

I hang my head in shame.
.
Anyway, here I am, at a fundraiser for the Community Writing Center schmozing with him: 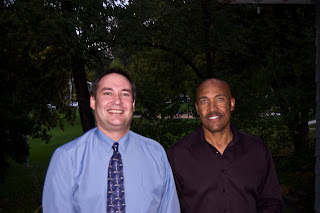 The theme for the fundraiser was the Haiku. Booner wrote a Haiku and offered a round of golf with him as well as other Jazz paraphenalia. I boldly placed the first bid for his haiku in the silent auction. I monitored the bidding throughout the night, but was ultimately outbid (substantially) by a woman who was excited that she stamped the floor and squeeled.

Now, fo course, I would ever behave in such a way. I was far too busy trying to figure out how I could work a miracle and improve my golf game in a very short amount of time. Hey, I wouldn't want to be embarrassed in front of a legend now, would I?

Side note: I also lost the bid on a Amiri Baraka "Afro-American Low Coup."
Posted by Clint Gardner at 11:40 PM