On a leafless bough

So I have a new toy...a Bamboo tablet thinger.  I bought it on a whim as a self-given birthday gift, but I've been inspired to do it by Hightouch and Snyder, who have (apparently) made excellent use of similar (or the same) devices.

After taking in the tutorial, I dived right into a program that has baffled me for years:  Adobe Illustrator.  While listening to the Jazz trounce the Nicks, I came to realize that Illustrator really is meant for devices like my new tablet.  I also realized that it really isn't all that different from many other Adobe programs I've used:  you just need to find what works for you and ignore everything else.

Being that my drawing skills are suspect, at best, I decided to start with some word art: 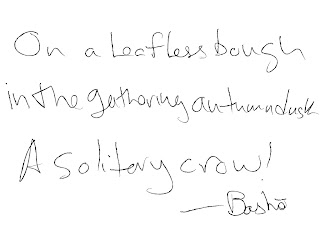 If you don't recognize it, this is a haiku by Basho--and a rather nice one at that.  I've never been a fan of my handwriting, but I actually wasn't bothered by this rendition.
Still--with a program like Illustrator, I felt compelled to do some more: 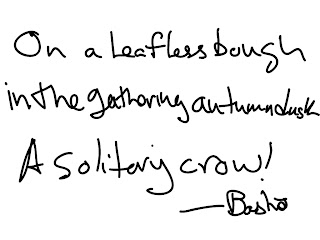 Basically this is the same file, with a fatter brush stroke.  It looks like I wrote it with a Sharpie[TM].
I realize that this is not very exciting to you, but I was very pleased with the difference and how my handwriting took on a more artistic bent.  I was even more pleased when I tweaked the file with this charcoal brush: 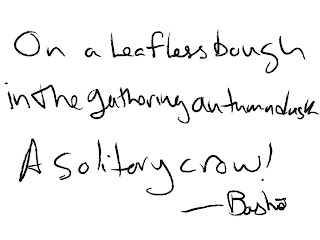 Now that's more like it.
With that, I decided to sort of emulate something Hightouch has been doing for awhile...adding text to photos.  While I was doing it, however, I couldn't quite stomach just throwing text up there on a photo, so I attempted to blend the text in, as if it were in the photo originally: 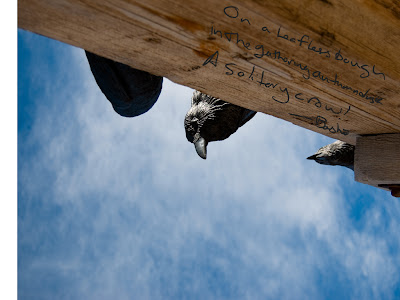 I don't know Illustrator well enough yet to get it to blend the text properly, but it does give the impression that someone has vandalized the wood--sort of.  I need to figure out how to blend the layers better (who knew Illustrator had layers!)
We'll see how this works out.  I think blending the text in was a mistake.  I should just do the layer over layer over layer thing.
Posted by Clint Gardner at 9:59 PM