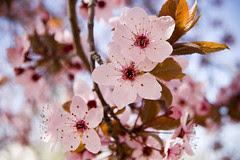 Today is the kind of day that demands we go outside. "Get out of the damn house!" the grass and trees and birds and sun all shout in unison. There is only the mildest of breeze, and even the concrete sidewalks have warmed to the idea.

So I decided to go for a long walk.

I have not really explored my new neighborhood on foot. I've really only looked at it from on high via our friend the satellite. I knew, therefore, what, generally, to expect, so I headed north from my house on an unknown street, with no particular intent in mind, other than the thought that my friendly household machines were doing my laundry and I needed lemon juice.

So I walked north past many interesting houses: a sprawling McMansion squeezed into its lot like a forty-year old man into his twenty-year old suit; a radical self-sufficient cabin completely out of place with its green, primitive-cut clapboards; and house after house of duplexes. I mused that the only reason for both the far-ranging architectural style and the prevalence of duplexes in my neighborhood is that I live in a corner of Salt Lake City that was not brought into the city until it had been well-established as a radical and unordinanced outlier.

At the end of this street, as I knew from our friends the satellites, there was a park area, abutting the back end of the local elementary school. To my surprise, however, most of the lot was fenced and a new imposing school building was set in the far corner. What will soon be open playing fields are now barren, sculpted by the latest in earth-moving machinery.

I stopped a moment on top of the hill to appraise the situation, and noted the many steps (some made of sandstone) that descended to the fenced-off hard hat zone. This is one of those secret public areas that you can find if you look hard enough in neighborhoods. I was happy that they decided to leave the big trees in place that stood watch over the once secluded space.

I started to notice the trees then. While some are more recently planted, there are many that are old--very old. Gnarled fruit trees throw their blossoms up to the sun, and giant pines have sprouted new growth for the spring.

Like the trees, the houses vary in age--from the odd Victorian to the single-level ranch house. I've gathered from the time here that my neighborhood is just as old as any in the city. I can only imagine the farms that once stood here--most likely orchards because of the hills and the hardscrabble, alluvial soil.

Moving down the hill, I begin to encounter people. At first I was a bit shocked that no one else had heard the command of the birds, the trees, the grass, or the sun, and felt compelled to be outside. While the moonscape of the construction was not very inviting, I began to notice people making their way out: A woman with her children in tow on a bike; some teenagers intending to play frisbee on the elementary school's greening playing filed; and the guy deciding today was as good as any to wash his '57 Chevy.

So I made my way down the hill, and passed by a duplex with a couple of hungover twenty-somethings sitting on the front stoop.

"Hey man!" the one with long hair and goatee said. I knew he didn't recognize me, but was just feeling the spring.

"How's it going?" I said not breaking my gate.

I am not sure why, but this was the start of my seeing several hungover twenty-somethings. Several were in the grocery store where I picked up the lemon juice I needed and some biodegradable trash bags. One of them was asking for a job.

I started to muse, as I'd mused about houses earlier, that spring had got the best of these kids, and a proper Bacchanal was instituted.

Even in our seclusion of single-family housing the call of spring cannot be ignored, although I'm still surprised not to see anyone out on the street from my vantage point cozy in my own house over looking it all. Perhaps they are all inside, as am I, contemplating the spring.

Perhaps, however, the Dish Network truck that just pulled up in front of a neighbor's house is a more telling sign.

After leaving the store with my lemon juice and biodegradable trash bags in hand, I climbed the hill back to my house on my familiar, everyday route. I noticed a disturbing amount of water flowing down the gutter. After imagining several pipe burst scenarios, I recalled the man with his 57 Chevy. The engineer in me wanted to capture that water or at least break up the hard cement and let it absorb into the thirsty soil. The environmentalist wanted to shake my head in disgust. I did neither, because as I came around the slight bend in the street, my eye and nose were taken in by a flowering plum, standing gnarled and crooked by the roadside. I can see it now from where I sit here in my house.

I stopped and admired the tree and thought of Basho's haiku on a plum tree:

I returned, then, to my house, and my friendly household machines had completed part of my laundry without me. While moving my wet clothes from the washer to the dryer, I was struck by the flowering plum. I grabbed the box top off some detergent and wrote the following:

Along the roadside
Stands a solitary plum
Calling us to her.

Posted by Clint Gardner at 1:44 PM